Bingsu is a popular shaved ice dessert served everywhere in Korea. American chains like Dunkin’ Donuts churn out variations on the Korean classic, and elegant restaurants offer up gourmet versions, too. Bingsu is a staple of summer in Korea, and one that I have fallen in love with!

Bingsu originiated in Korea as early as the Joseon Dynasty, with records of government officials eating fresh fruit atop shaved ice. Now, everyone can afford to eat it, with bingsu ranging from 4,000 WON to 50,000 WON depending on the frills.

To get out of the miserable heat and humidity while touring around museums in downtown Seoul last week, me and Cain stopped in at Latteya Coffee (a small chain), where we had been to before for some bubble tea months ago. We were lured in by the green tea mango bingsu, which, while delicious, was absolutely nothing like what was advertised.

The shaved ice was infused with green tea, so we were eating small flakes of iced green tea, in a sense. This is done using a snowflake machine, and it a time consuming process. An entire can of mango chunks was spread around the base, and slices of  grape decorated the dome of ice. A scoop of ice cream rested comfortably on top. 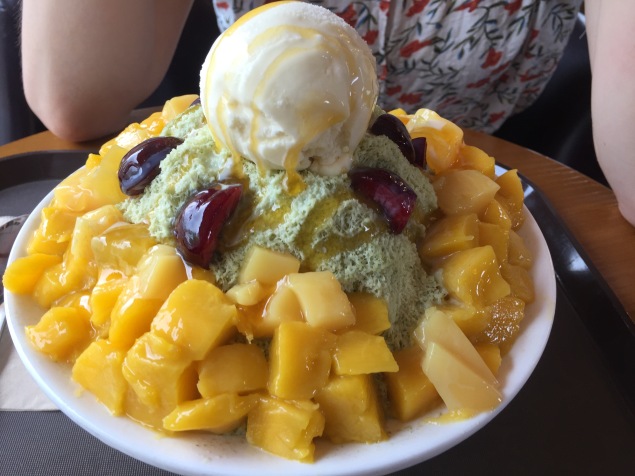 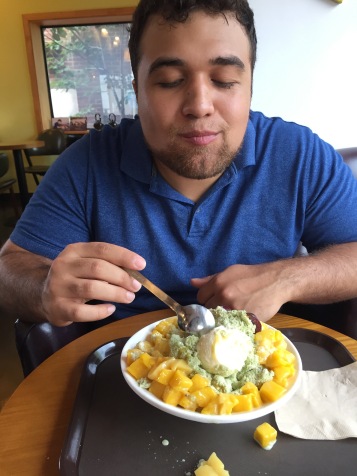 Bingsu is no doubt healthier than digging in to a bowl of ice cream the same size, and doesn’t give you the same kind of stomachache afterwards. The ice snowflakes are numbingly cold, and it felt like the entirety of my internal organs were cooled down after eating. Somehow walking around outside in the miserable heat was a lot less painful afterwards. 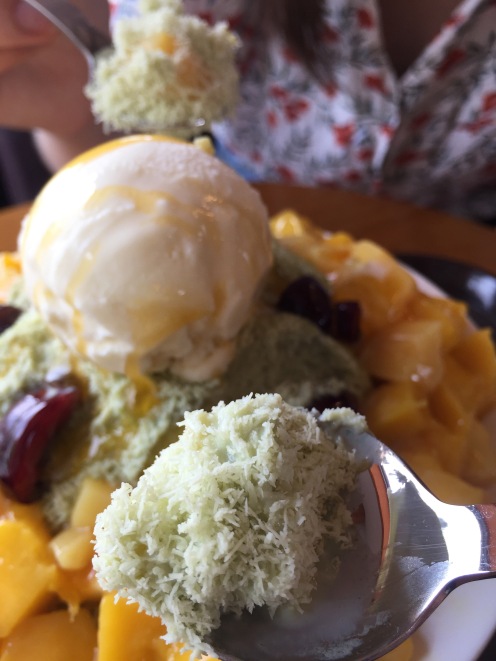 This branch of Latteya Coffee is in a nice location, five minutes away from the Korean Folk Museum and in the Bukchon Hanok Village. Also, while you enjoy your treats you are being gazed at with benevolence from a revolutionary. It’s interesting.

If you’re in Korea in the summer, treat yourself to some bingsu and don’t be galled by the prices. It’s totally worth it.