Galbi-jjim (갈비찜) is a dish of braised short ribs. In Korea, beef is usually pretty expensive (think about it; there isn’t a lot of space for grazing) and is therefore traditionally saved for special occasions. Therefore galbi-jjim is made with a special cut: the tender center ribs of a calf. It is usually accompanied by copious amounts of rice wine (makgeolli) or soju. Personally, I was on a steady diet of antibiotics and had therefore decided to forsake that part of the dining experience.

For my galbi-jjim fix I went to 동인동 (Dong Indong), which is hidden away among the glitz and glam of the Sinsa neighborhood.

For a non-Korean speaker it looked rather intimidating from the outside but once we got our table we were quickly presented with an English menu.

Jessye and I ordered the “braised spicy short ribs.” I had been complaining the day prior that Korean food “is not as spicy as they say it is” so I was already preparing to be smug, look around the room, and say “you think this is spicy?”

Soon after we placed our order an ajumma placed a tin-pot on the counter that looked so beaten up that I would have believed it had been around since the reign of Emperor Gojong. When our server brought the tin-pot to us and I looked in and saw the ribs sunken in a deep-red sauce. It was time to swallow my words.

Soon enough I was eating slow-cooked, tender meat right out of the bowels of Satan. As I progressed through the meal, the pain of the spice heightened the pleasure of the high-quality beef and I was drawn deeper and deeper into the inferno. I found the side dishes necessary to cut the heat a little bit.

Once we had finished the meat I looked, in quiet desperation, behind the empty bottles of soju over to the corner alter. 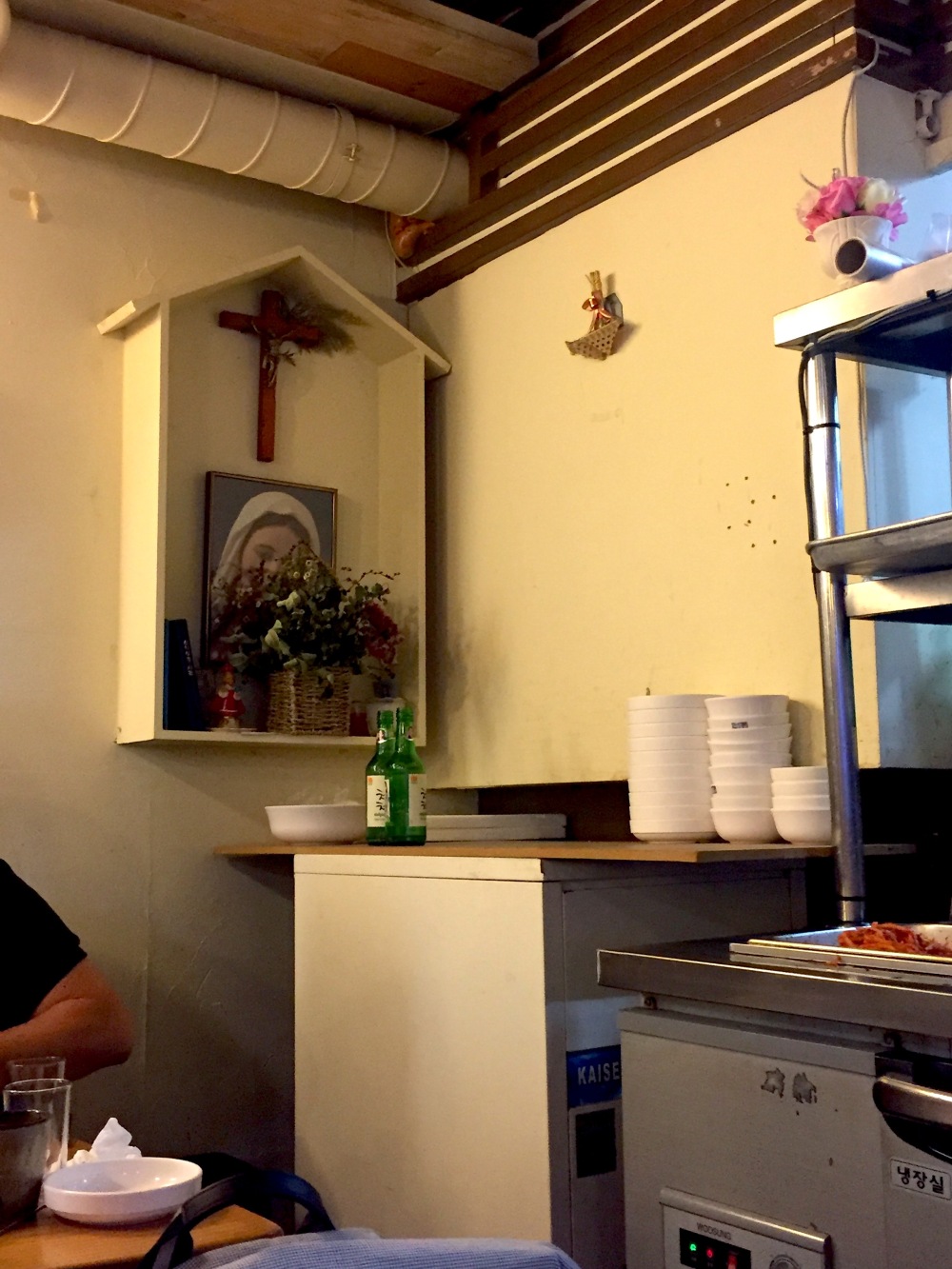 I blinked in disbelief as the corners of the Virgin Mary’s mouth twisted up in a devilish grin. I had asked for salvation, she sent over fried rice instead. The rice was mixed into the tin pot with the left-over fiery sauce.

Using two huge pitchers of water as crutches, we made it though the meal and ate every last bite.

Also, I take it back — Korean food can be spicy as hell. And extremely satisfying. Just writing this makes me want to go back to 동인동 for more.