Living in the Republic of Korea has been a very interesting, often fun, experience but when you live and work in a place that is not your own, you will occasionally feel some mental fatigue.

One particular Sunday I found myself walking past old women selling vegetables on the sidewalk; Christian proselytizers passionately yelling “yesu geuliseudo,” or Jesus Christ, into my face; and a woman who was treating the world like her own personal norebang, or kareoke room, singing off-pitch K-POP songs to lure more customers to her gym. People either severely avoided eye contact with me or made unbroken eye contact with me as I walked down the street.

Yes, I was feeling Culture Shock.

I stopped at an ancient stone tablet and began to feel a warm glow envelop me.

I saw a Burger King.

I fondly recalled my rebellious youth, skipping math class to go hangout at the local Burger King. Emotionally, Burger King was exactly what I needed.

Let’s take pause for a moment and acknowledge the self-righteous travelers and holier-than-thou expats that are saying:

“Really, dude? You live in Korea and you are eating at Burger King?”

To that I retort: yes. And I actually learned a lot about Korean culture while I was there.

The staff in Burger King did not speak English but the vending machine did. Jessye and I ordered the Monster Whopper and the Tong Shrimp Burger.

We sat down and waited for our order, trying to pretend that the whole restaurant was not staring at us.

Ding, ding. Our order popped up. I was giddy with anticipation and watched eagerly as Jessye wove through the crowd with a tray carrying two burgers, extra large fries, and a tall cup of Sprite and a tall cup of Coke.

I noticed the tray wobbling.

She was close to the table. The Coke titled to the left, then to the right. Life entered slow motion and I let out an involuntary yelp as what looked like a liter of coke flew through the air and directly onto my face.

If we were in America, people would have looked at me, some people may have chuckled or commented on the event, or even helped. Yet, this was not American Burger King. This was Korean Burger King, a place where saving face is highly valued.

So, although people probably wanted to look at the spectacle the foreigners were making really badly, they did not. Everybody purposefully looked away and continued chatting like nothing happened.  I had seen this courtesy of feigned obliviousness extended to strangers crying on the train or during embarrassing conversational blunders but experiencing it firsthand made me appreciate it more.

So, although I went to Burger King thinking I was going to take a break from Korea, I actually learned something about Korean culture that I really respected.

Now, before we get too sentimental, let’s talk about the burgers.

The Tong Shrimp Whopper helped me make a recovery from what I now refer to as the “Burger King Incident of 2018.” With tomato, onions, a super-spicy sauce, and shrimp over a steak-burger, it is one of the best burgers I have had in Korea.  I ate it too quickly to take a picture of it so here is a slightly more glamorous photo. 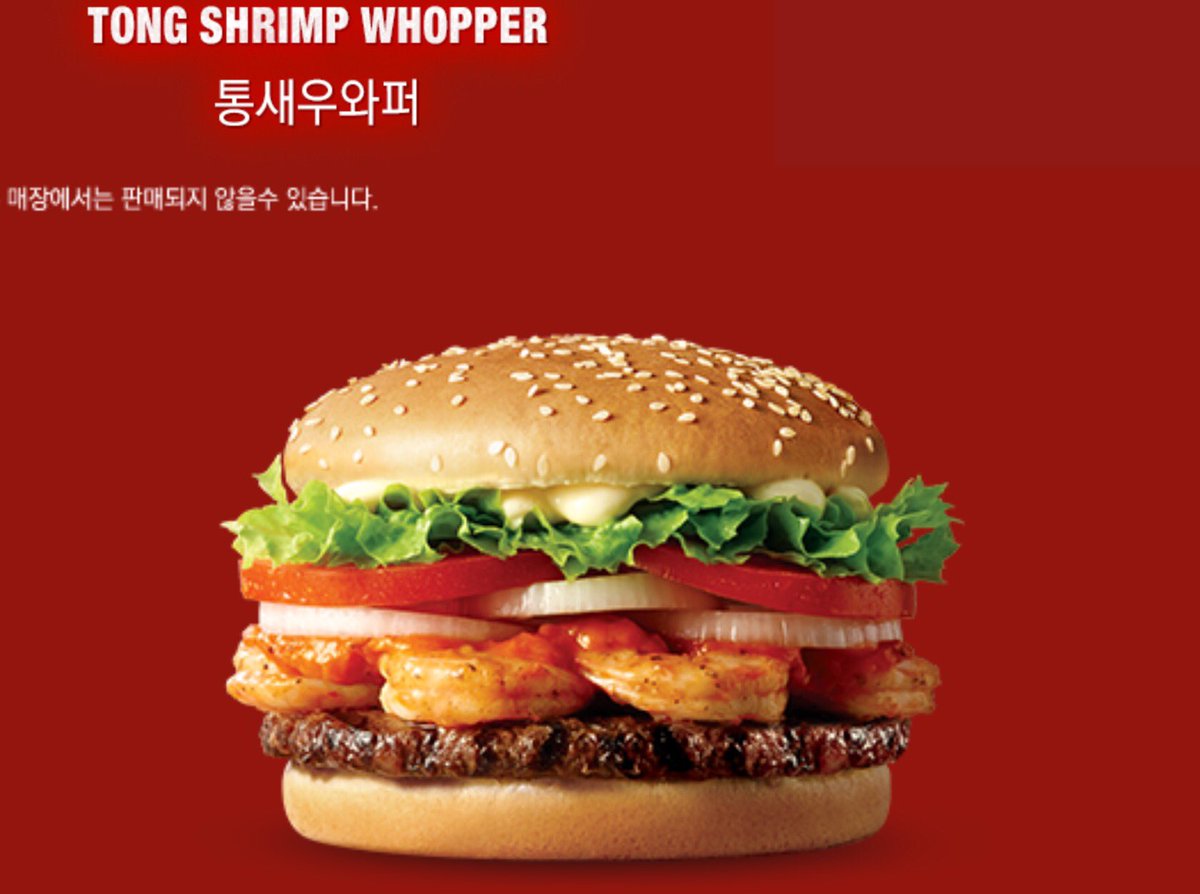 The same fire sauce from the shrimp burger is also on the monster whopper, which is a straightforward and satisfyingly hedonistic layering of beef, pork, and chicken. For reference, this is what the Monster Whopper really looks like.  In defense, the above picture is more representative of the actual taste.