Within every bowl of ramen is a steaming solar-system of broth, noodles, green onions, and pork that, if done right, can create a microcosm of a just universe. In Tokyo, Osaka, and Fukuoka I have had ramen of this caliber, but not in Korea. With the long (and complicated) relationship between Japan and Korea I was surprised by how hard it has been for me to find a good bowl of ramen in Seoul.

Enter the COEX 2018 Korea International Ramen Fair. Ramen joints from around Seoul would be there and I figured this would be the best place to find the bliss-worthy bowl I had been looking for in Korea.

But when Jessye and I walked into the event space at COEX we were surprised to see a plethora of instant ramen booths.

Although instant ramen was not what we were looking for, we decided to jump in line for some free samples. The standout to us was Indonesia’s mi ABC Ramen.

While I waited in line for mi ABC ramen, I thought of my previous experiences with instant ramen during college. I pictured myself sitting on a worn couch, eating overcooked noodles while watching Anthony Bourdain eat something more appetizing on Parts Unknown.

Surprisingly, when I slurped the Chicken Soto-flavored noodles and broth out of the dixie cup, the psychological barrier was broken down. “I would, like, actually eat this for a meal” said Jessye. I agreed, mi ABC ramen packed a punch. The broth had a subtlety to it that I did not know instant ramen could have. We immediately bought two Chicken Curry packets, one Chicken Soto, and one Hot Gulai.

Our Journey continued. There were many stands at the expo selling ramen equipment for restauranteurs, some beer vendors, and even a self-serve ramen section.

In the back of the event space was where real restaurants had set up stands, competing for the title of best ramen in Seoul. We decided to each get a bowl from the stands with the longest lines.

Our first bowl was from a booth designed like a Japanese restaurant, with Ema, or Japanese prayer boards, decorating their space. 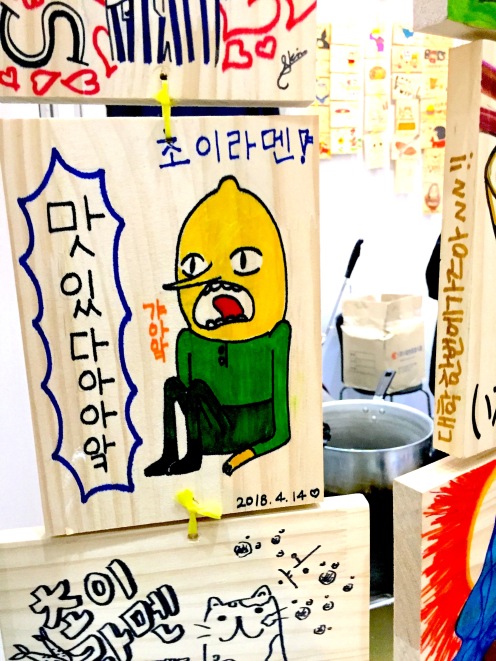 The broth, pleasantly spicy, was the best ramen broth I have had in Korea. Same goes for the chashu, or pork belly braised in soy sauce, sake, and sugar. Alas, I think it was a decidedly average bowl of ramen. 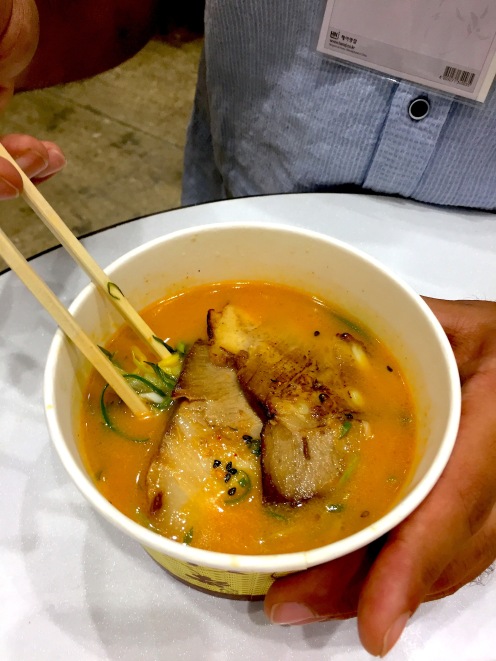 Despite the brave smile in the picture above, I was sinking into something of a hysterical depression by the time we got to our next bowl of ramen. I was skeptical as the egg yolk had been cooked all the way through, which is something I am usually wary of. But then it happened. I sipped the broth and nibbled the pork and my tongue, no, actually my entire body, began to vibrate.

Prostrating over a plastic table, I entered a state of total ecstasy, sweatily slurping God. Behind me, the chaotic world continued to turn, two separate screaming matches breaking out, the police showing up, and a concerned crowd forming a few feet behind me. In a dangerous world full of violence and uncertainty, I had found a moment’s peace and could not be bothered. Slurp, Slurp, my mind was still. Ramen, Amen.

Here is the business card and the brick and mortar address of the ramen place that we tried: 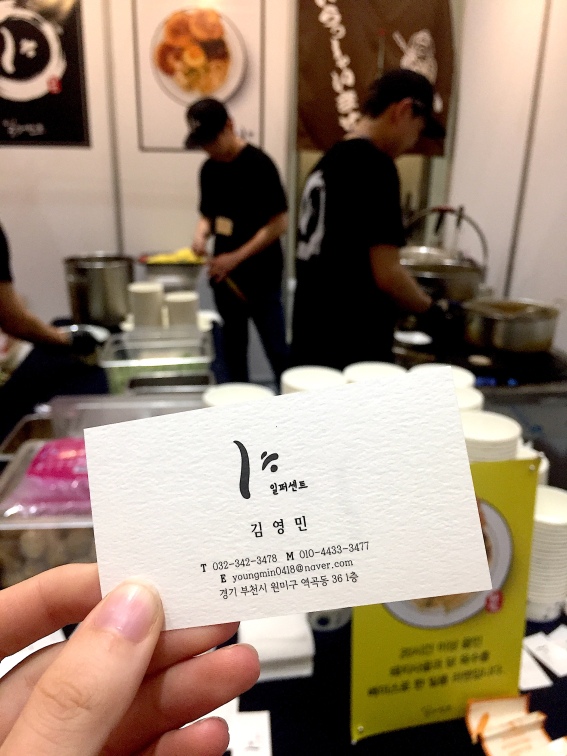 We ended our journey by going to a section of the Ramen Expo dedicated to the DPRK. There was a photo exhibit, a vendor selling North Korean currency, and a food vendor selling three North Korean snacks. We selected the soft mandoo with chili pepper spread on top. We were given gloves to eat with and when we popped the mandoo in our mouth we were impressed by how the rice and chili pepper mixed to produce a spicy mildness we had not experienced before. 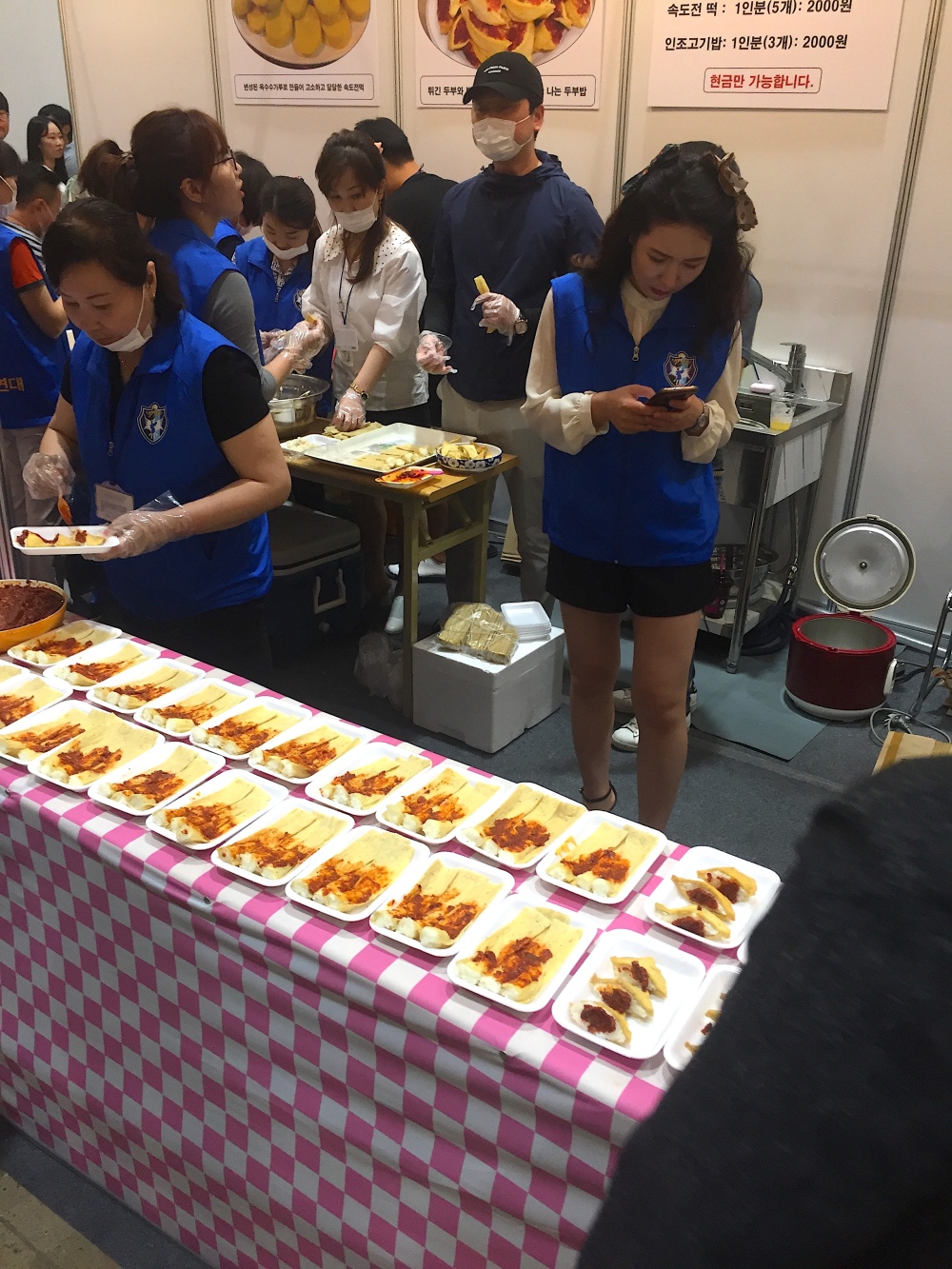 All in all, I was able to find salvation and it only took me two hours.