The walk to Michelin-starred OkDongsik (옥동식) provided a rare moment of silence, save for the roaring cicadas. We puttered on through brick alleyways until a line of people appeared in the distance, their bodies sliced up by the violent heat rising off the pavement.

OkDongsik had a line that day not because it was particularly busy, but because the seating is limited to 11 counter-top spots. Furthermore, the restaurant, in the interest of quality-control I presume, only produce 100 bowls of pork gomguk (곰탕) a day.

We all queued quietly, watching the air-conditioning unit drip, drip, drip into a delicious-looking puddle on the hot pavement. Eventually, we were in the front of the line and when the door opened and a couple exited we heard the namesake chef, OkDongsik, holler for us to come inside.

Cool air chilled the sweat on my face while my eyes adjusted from the blaring light of the sun to the dimly-lit, minimalist art-deco diner. We sat at the end of the intimate counter-top and watched everybody eating in reverent and restorative silence. Ok Dongsik walked over to us holding up two brass bowls: “Small or large?” he asked. There was a pause as I stared past him, gazing at a man carrying a huge bamboo basket of freshly steamed rice out of the kitchen. “Large,” Jessye said.

The man put the bamboo steamer down behind the counter and scooped out two large portions of freshly-steamed rice, packing it into our bowls. He went to the simmering pot and ladled out some pork-bone broth that had been boiling for three days straight. Lastly, he dipped in a hearty stack of thinly sliced pork and sprinkled in some green onions. 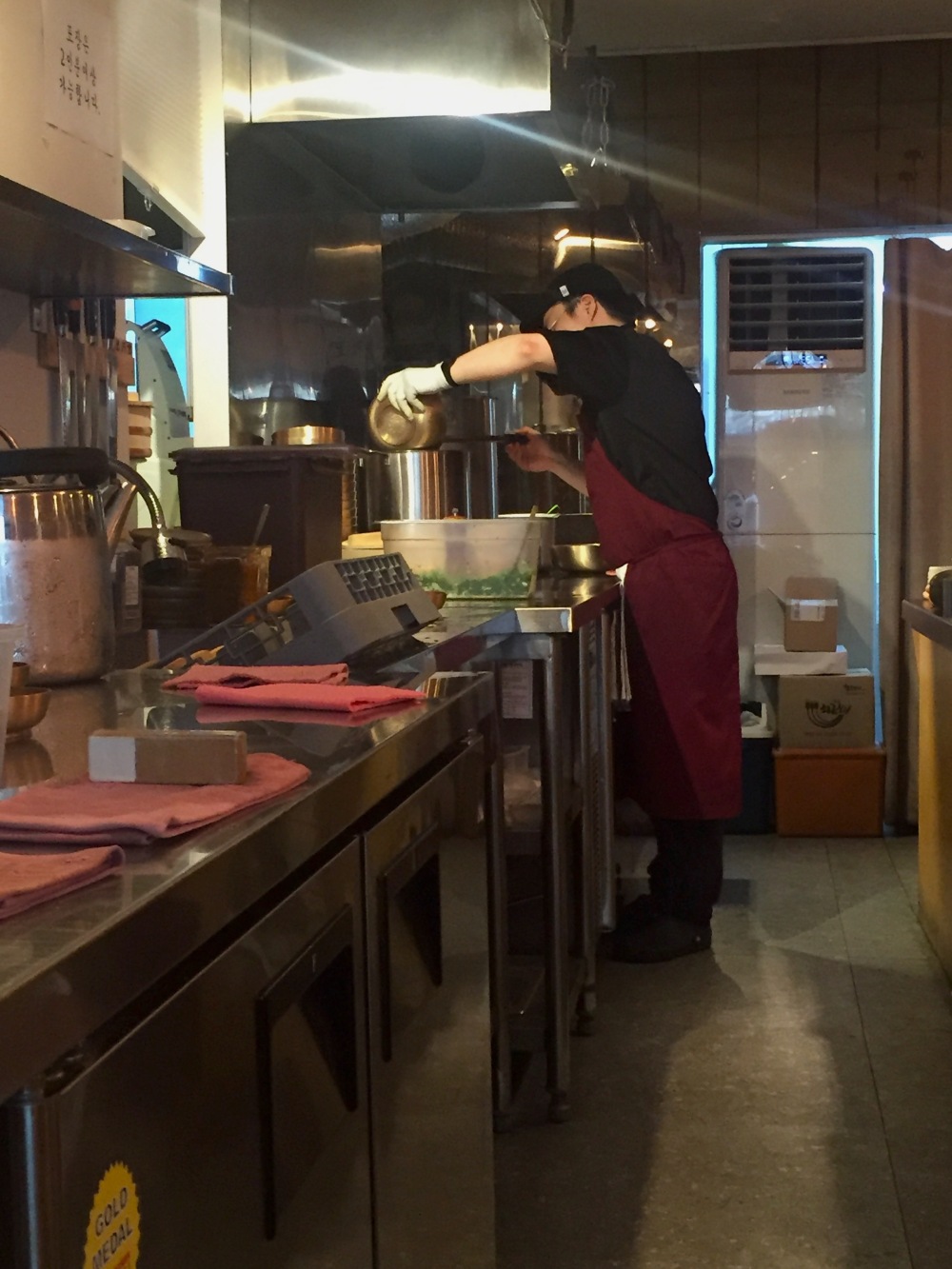 The result was simple in the extreme, so much so that I cannot help but think it was a statement. I looked into the bowl and saw a bed of rice, green-onion speckled broth and a slab of sliced pork. On the side was kimchi and doengjang. 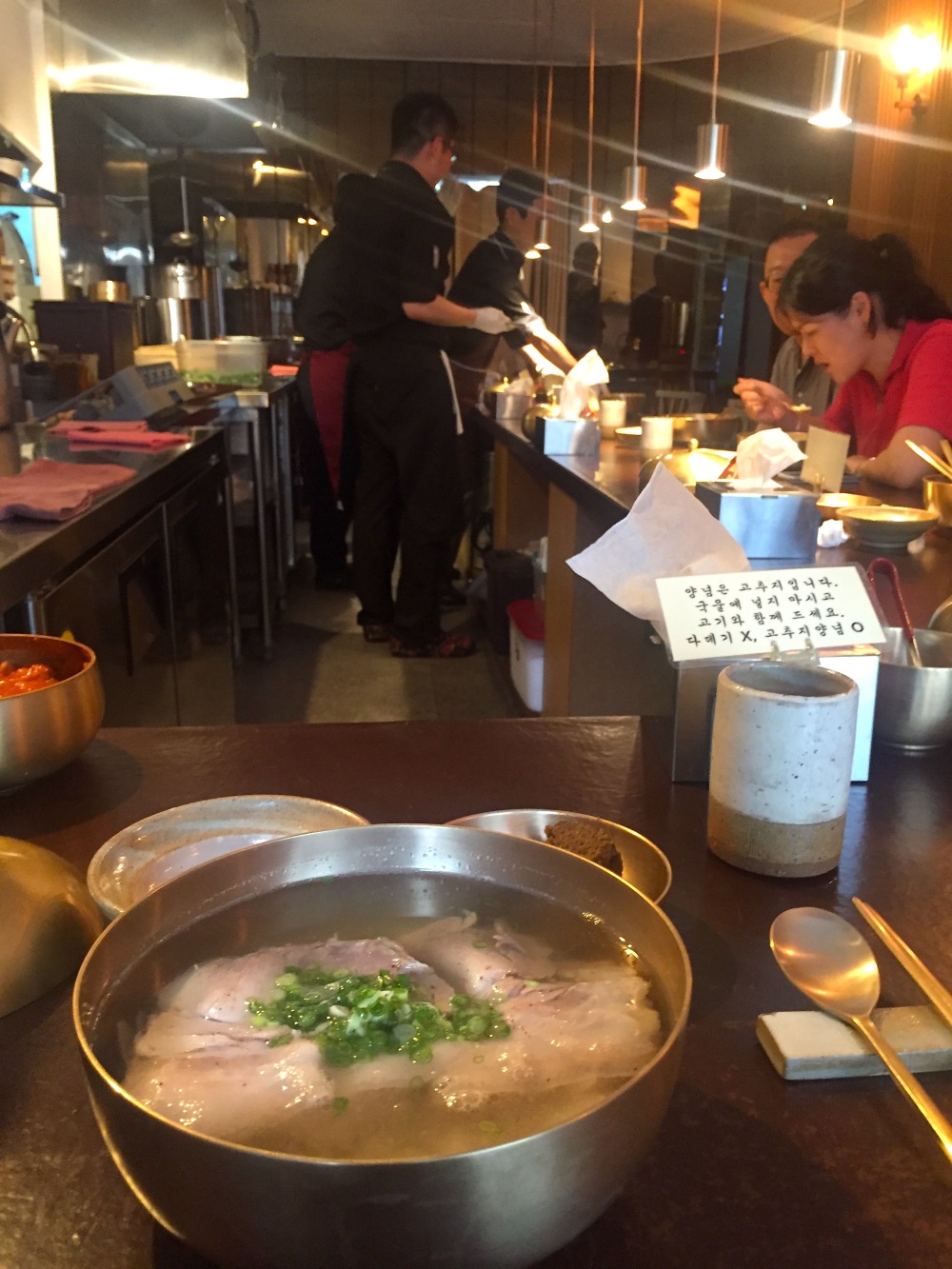 The broth was totally clarified and free of sediment, looking almost like naengmyeon, odd for the usually thick gomguk. Indeed, when I tasted the clear broth it was crisp and weightless. There was also something else. Something straightforward, yet layered, like a Rothko painting. In each spoonful of the light broth I tasted the loud echoes of a deep, murky stew, heavy as a pig slaughtered in celebration of a harvest.

The side of soybean paste, which was heavily pock-marked with chili peppers, was a nice compliment to the broth. I enjoyed dissolving small chunks in the broth on my spoon, along with some rice. The kimchi was good too.

The rice lingered at the bottom of the bowl for some time and became soft but not mushy, fortified enough to maintain its integrity.

Lastly, the pork — thin slices stacked on-top of each other — reminded me of high-quality deli meat and satisfied me in the same way.

Earlier in the day I had been reading “The Way of Korean Zen” by Buddhist Master Kusan Sunim. In the collected sermons Master Kusan talks about Hwadus, or short phrases that are turned into the focal point of meditation.

A simple soup, examined closely and elevated in vividness and intensity, one hundred times a day, six times a week.